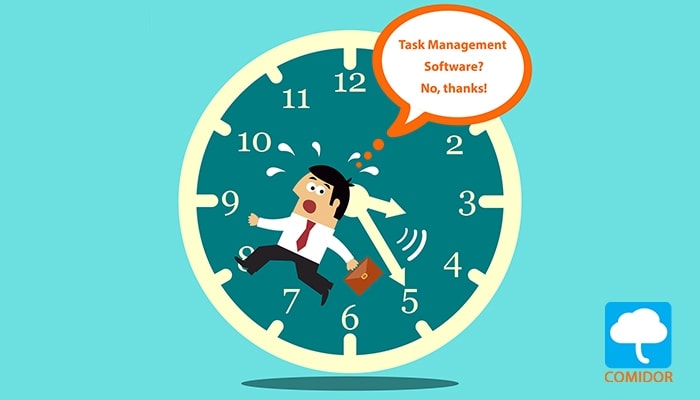 Key Reasons Not to use Task Management Software

Despite the variety of Task Management Software, there are still professionals who have not figured out what these tools really offer or they have not found yet the suitable solution for them. Of course there are also those who just refuse to use them. For example, the “busy guy”:“I cannot lose my time keeping records of my tasks, I prefer just do them”. Or, the “lazy guy”: “To use it for what? To keep records of not completed tasks…?!”.

Key reasons that make people feel absolutely right deciding to not use Task Tracking Software are the following:

Ignorance of Task Tracking Software variety, pricing, features and functionality can be considered as the main reason that people do not use this kind of apps. According to Julie Titterington, Managing Editor of Merchant Maverick, “If people knew that there were inexpensive, user-friendly tools without extraneous features which do not require installation, training, or IT support to maintain, they would be much more likely to use task tracking software”. Leslie Shreve from Productive Day describes that “using task tracking software professionals can continuously plan and track action steps, compare and contrast everything they need to do from multiple sources: email, voice mail, papers, files, meeting notes, conversations, etc., prioritize accurately and effectively, and know where their time should go without losing track of the rest”. Here comes the question “do people know that all these can be done in an easy and quick way”? Maybe yes, however then the issue of pricing may rise. AsJulie Titterington informs us “they assume (falsely) that task tracking software is too expensive and won’t fit in their budget. The truth is, however, that most basic task tracking tools are relatively cheap, and some are even completely free. Even if you have to spend $50/month to help streamline communication and increase productivity in your business, it is well worth the investment”.

Without linking tasks with business objectives or having no methodology for task management in order to enhance collaboration and improve productivity there is no reason to use Task Tracking Software. Leslie Shreve points outthat“without a methodology for their technology, a system and a process to follow, professionals struggle to know how to use task tracking software”. Sabrina Atienza  from Qurious.io emphasizes that“It’s tedious to configure task management software properly” and Leslie Shreve adds “The default screens on task lists typically show Subject and Due Date which entice people to add projects and due dates (even when there’s no formal due date) and it keeps professionals stuck in project management thinking instead of task management thinking, and that isn’t helpful for making meaningful progress”. Paul Sokol, Data Scientist at Infusionsoft has observed that “When first getting started, the feature overload distracts a new user from focusing on the objective which is to set it up in a manner that works best for them and their workflow. Even worse, sometimes people aren’t even present to their own workflow and style, so they will configure things wantonly and hope it works”. Having a specific methodology for task tracking you know what you need to configure and how to customize it. Consequently, you can save time on the transition process and achieve enhanced collaboration and increased productivity by using the specific tools.

Some people may be not so productive, as the want to be, due to several reasons such as ineffective time management, procrastination, wrong prioritization, lack of motivation, lack of discipline, distraction issues etc. Definitely, there are also those who do not care to be productive. Both would not like to reveal their low productivity using task tracking apps. Moreover, even productive employees may feel exposed using them. Sabrina Atienza explains “Task tracking software can illuminate who’s really doing what, how effective they are, how much time they’re spending or wasting, and so on. That level of transparency is scary”.

4. Lack of Commitment to the Habit

People realizing the benefits of using task tracking software, they consciously decide to use it. Unfortunately, this is not enough. They should do it daily and this requires great discipline. Paul Sokol warns us ”for a task tracking program to deliver the value it promises, the user must make using it a daily, unflinching, habit. While a lot of people can see the value in a task tracking program, they lack the discipline to use it impeccably every day. As a result, they sporadically use it and things get chaotic”.

5. Lack of Commitment to an Official System of Record

Ok, we have to admit it; Habit Change is extremely difficult. As Paul Sokol claims “Even if someone can get a task tracking system setup and use it daily, there still has to be mindfulness in getting any and all new tasks into that system as soon as they are identified. It takes effort for someone to adjust their thought processes and stop using sticky notes, or random notepad docs; they slip into their old habits easily”. Julie Titterington elaborates a little bit more on this issue stating:“They like things the way they are, and don’t want to change to a fancy new system. People don’t like change, period. Task management tools exist to consolidate information/files and improve interoffice communication, so fully committing to task tracking software usually entails giving up other forms of business communication, like sticky notes, casual conversations, phone calls, and email. For some businesses and business owners, it is just too difficult to make the transition”. But, keep in mind… as Aristotle said:“We are what we repeatedly do. Excellence, then, is not an act, but a habit”.

You might also like
One of the following
10 Must-have Document Management Software Features
Collaboration Technologies to Watch in 2022
What is a Digital Workplace? Definition, Aspects and Benefits 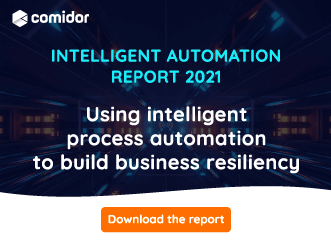